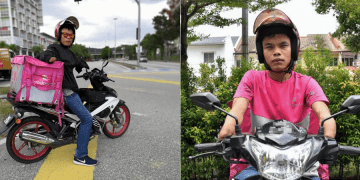 Those Travel Interstate Illegally & Stranded In Hometowns May Lose Their Jobs

Quantum Thinker Helps Transforming Your Business Digitally With Less Than RM2 A Day!

So what's your excuse?

A guy shared a video of Syahrain Fadzil, a Foodpanda rider who makes an honest living despite having special needs. Many netizens responded to the video by showing support and amazed at his motorcycle riding skills. He is truly a real inspiration for many to work hard and to never give an excuse.

Syed Mohd Syahrain Syed Fadzin, 25 works full time as a food delivery man on his motorcycle. He just started working with Foodpanda two months ago and before that, he made ends meet as a car washer. Not long before that, he also worked as a despatch rider, sending car replacement parts to workshop owners for five years.

3. Changes the perception that Malays are lazy

Foodpanda once doubted whether he could do the job. They wondered how Syahrain would be able to carry the plastic bags of food. But they seemed convinced when his friends told them that he used to carry car replacement parts around.

He wanted to prove that disability is not an impediment to earning an honest living. He also wanted to change the perception that Malays are lazy. For , it all depends on one’s will. If you are lazy then you are lazy. But if you are hardworking, you will see what a difference it makes.

4. A victim of home-made bombs

Speaking about his past, lost both his hands when he was nine years old while playing at a vacant shop in front of the Sungai Buloh prison. He found two round objects as big as tennis balls. Without thinking the possibility the objects might be bombs, he banged both together and they exploded. He was one of the four victims who injured due to the home-made bombs.

Despite his disability, he makes an honest weekly income of RM 600 to RM 800. He works 10 to 12 hours a day delivering food to customers. For , he never experienced any issues while doing his job and just used to it. His determination and can-do attitude really inspiring. So what’s your excuse?

GREAT THINGS
COME TO THOSE WHO SUBSCRIBED
(Article Updates, Event Previews and More!)

It only took him two days and costs just RM 173.80 to build the robotic cart

The plan was to benefit over 21,847 recipients, including micro entrepreneurs, medium-sized enterprises, social entrepreneurs, startups and cooperatives.

This unemployed figure includes fresh graduates and the 610,000 who just lost their jobs before March this year.