CNY May Look Different This Year, But You Can Have Fun Playing Monopoly Lunar Edition

What’s With Everyone Leave The Messenger Service App? Are Our Private Messages Protected?

Which Businesses Can Stay Open During MCO? According to The Govt Only These 37 Businesses

The World’s Richest Person, Elon Musk Reveals That He Didn’t’ Take Salary From His Companies

A Volkswagen T6 Transporter van being assembled in Hanover, Germany. Apple has signed a deal under which Volkswagen is to produce self-driving versions of the van to serve as shuttles for the tech giant’s employees | Photo Credit Kirsztian Bocsi/Bloomberg

TRENDING
CNY May Look Different This Year, But You Can Have Fun Playing Monopoly Lunar Edition 15/01/2021
What’s With Everyone Leave The Messenger Service App? Are Our Private Messages Protected? 14/01/2021
More SMEs Will Close Down If MCO Extended & Govt Support Is Crucial To Help Them Survive 13/01/2021
Which Businesses Can Stay Open During MCO? According to The Govt Only These 37 Businesses 12/01/2021
The World’s Richest Person, Elon Musk Reveals That He Didn’t’ Take Salary From His Companies 11/01/2021
Next
Prev
Home Insights

Are you ready for the future?

Apple has a dream; a dream to build its own electric self-driving car and lead the next generation of transportation. And in 2018, the tech giant’s ambitions ran into the reality (albeit delayed, according to the brand).

Apple originally began its car project – known internally as Titan and T172 – in 2014. At the time, Apple planned to build a single vehicle that would upend society and industry, in what would be the automotive version of the iPhone. So, the company set to work on an electric driverless car, where passengers face one another instead of the road. It also went on to enlist software programmers, automotive engineers, rocket scientists and the industrial-design team of Apple’s design chief, Jonathan Ive, to reimagine the car.

In 2015, the brand was experimental. It also entertained a series of unconventional concepts, including augmented-reality or holographic displays embedded in windshields and windows, a sunroof made of a special polymer that reduces heat from the sun, and windows with adjustable tints – like those on Boeing’s new 787 Dreamliner jets.

A year later, the tech giant planned to spend hundreds of millions of dollars to build research and development labs around its Cupertino, California, campus, including a machine shop and labs for electric car batteries. Yet members of the car project soon found that even designing and building fundamental parts of a new car was not simple. In turn, those plans quickly shifted to finding a manufacturing partner to build – but not design – the cars.

What’s With Everyone Leave The Messenger Service App? Are Our Private Messages Protected?

Which Businesses Can Stay Open During MCO? According to The Govt Only These 37 Businesses

What is coming is better than what is gone

Almost effectively, Apple sought partnerships with the luxury carmakers BMW and Mercedes-Benz to develop an all-electric self-driving car. But on-again, off-again talks with those companies have ended after each rebuffed Apple’s requirements to hand over control of the data and design.

But last year, Apple found a partner in Volkswagen. Now, at a lab near Turin, Italy, run by a Volkswagen subsidiary called Italdesign, the companies plan to remake the car maker’s T6 vans as electric self-driving shuttles. The frame, wheels and chassis of the T6 vans will remain. However, Apple will be replacing many components, including the dashboard and seats.

Apple is reportedly adding other computers, sensors and a large electric car battery. The shuttles will ferry employees between two of Apple’s Silicon Valley campuses, and will include a driver behind the wheel to take control if needed, as well as an operator in the passenger’s seat tracking the van’s performance.

Executives leading Apple’s car project had told CEO Tim Cook that the shuttle would be completed by the end of 2018, but that deadline will be missed. It is unclear whether Apple’s partnership with Volkswagen will extend beyond the shuttle.

This article is an abstract from The New York Times

In just 72 hours after the announcement, Telegram has 500 million users signups and 25 million new users on Signal.

The president of SME Association of Malaysia, Datuk Michael Kang believes if the MCO is prolonged, it will be more...

The government has categories 37 types of businesses in the five essential sectors allowed to operate during the MCO in...

The richest man in the world is now Elon Musk surpasses Jeff Bezos. 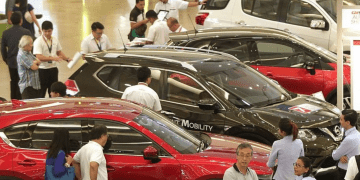 The percentage of SST exemption remains unchanged from what was announced before - with 100% for CKD cars and 50%...

Based on the survey, 85% of respondents believe that companies will prefer hiring people who can perform multiple functions.

You won't believe it that Ryan Kaji the world child influencer is earning more than you and surprisingly, he is...

Ecommerce sales grew by over 30% this year alone, driven by unusual consumer demand during the global pandemic COVID-19.

Pharmaniaga Bhd is ready to distribute COVID-19 vaccines which are expected to be ready by the first quarter of 2021,...